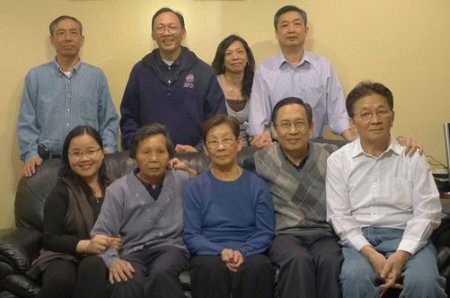 My aunt Wan Ying sits bottom row, second from the left, surrounded for the first time by all her brothers and sisters. Her granddaughter Chun Mei is sitting to her right.

Today, I’m writing from the heart rather than my stomach:

When she was only 3 years old, my aunt Wan Ying was separated from her family.  During World War II, my grandparents fled unrest in their home of Rangoon, Burma (a.k.a. Myanmar) by temporarily returning to my grandfather’s home village, just outside the Guangzhou, China.  When the war was over, my grandfather returned to Rangoon, then sent for his young family.  At the time this included my father, 6 years old, two sisters, 10 and 3, and their infant younger brother.  During their stay in Guangzhou, the family had befriended an older couple who could not have children, and wanted to adopt 3 year old Wan Ying.  The trip from Guangzhou to Rangoon would take 2 months, and would be difficult for my grandmother and her brood.  Her 10 year old was at least old enough to carry the suitcase, my father would be responsible for carrying a teapot, and grandmother would already be carrying and caring for my infant uncle.  So the family arranged to leave Wan Ying behind with the elderly couple.

From Burma the family kept in touch with Wan Ying.  My grandfather would send money to her and her adoptive parents.  Meanwhile my grandparents would go on to have 5 more children, brothers and sisters Wan Ying would only know from photographs.

In the late 1960’s, fresh out of college in Rangoon, my mother and father came to the US.  They got married, bought a house, had two children and over the next 20 years sponsored the immigration of both their families.  The only sibling they were not able to bring to the US was Wan Ying.  She was now married with children of her own, and still living in the remote farming village where she had been left behind so many years ago.  When my father had business to conduct in China, he would make an effort to visit her.  His youngest sister and her husband, an immigration lawyer would also make the trip to China and appeal to the consulate to at least grant a visa so she could see the rest of her family.  All attempts failed.  Wan Ying was unable to read or write and only spoke the local dialect of her village.  The consulate would not be convinced that she was their sister.

It was only when my uncle Michael died in a tragic and highly publicized casino bus crash that the family was able to get the right people to listen.  Michael was the same infant brother that my grandmother carried on the family’s return journey to Rangoon.  Armed with newspaper clippings and memorabilia, the family convinced our Congresswoman to intervene on their behalf.  The consulate rushed a visa and new passport not only for my aunt, but for her granddaughter Chun Mei to travel with her.  Now after over 60 years of being separated from her family, my aunt Wan Ying has a one year unlimited visa to the US.

The family paid for the flights here and Wan Ying spent three weeks catching up with all the siblings she never got to know.  She and ChunMei stayed with my aunt Betty, but for three weeks each of her siblings took turns taking days off from work to  spend with Wan Ying, shopping and sight seeing.  Their activities ran the gamut.  In the photo above, she had just been treated to a visit to the hair salon.  She also spent time touring the  ethnically diverse neighborhood of Flushing, shopping at outlet malls, and spent a weekend at my Uncle Frank’s house in rural Lancaster, PA.  I was only able to spend an evening with her, but when I arrived at the house, Wan Ying immediately came over and gave me a big hug – no doubt having recognized me from photographs.  There were many family photographs taken that evening, as everyone wanted to document the first, and possibly the only time the entire family would be together.  Even though my uncle Michael was not present, he was there in spirit, as it was the very tragedy that took his life that made this amazing family reunion possible.

4 thoughts on “From Tragedy, a Bittersweet Reunion”