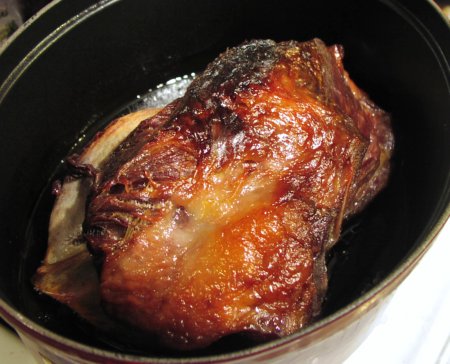 I ordered a pork shoulder through Basis Foods a couple months ago.  The online store estimated each one at about 8 or 9 lbs.  But when it arrived from Mountain View Farm it was a whopping 13 lbs, and…it was frozen.  So I popped it in my freezer because unless I had a special occasion or a plan to make use of all that pork, there was no way the Buddy and I were going to be able to eat all of it.

Last week I finally thawed it out.  The boneless half I sliced into steaks which I used to make Char Siu, and Tasso Ham.  The bone end, which weighed about 7 lbs. became the easiest pulled pork ever.  I looked up David Chang’s recipe for his Bo Ssam in the Momofuku Cookbook, and was truly surprised at how basic his recipe was for marinating and cooking the pork:  Rub pork with salt and sugar and marinate overnight.  Cook pork, in a covered pan at 300 degrees until fork tender.

That was it.  I cooked the pork in a covered dutch oven overnight.  You don’t need to add any liquid to the pan because the temperature should be low enough, and a typical pork butt should release enough pan an juices to keep the roast from drying out.  Just make sure your butcher has left a good layer of fat on to keep the meat from drying out.  I set my alarm for 6 hours, and awoke to find a perfectly cooked pork but that was falling off the bone.  The sugar caramelized over the covering of fat, making it wonderfully sweet, salty and crispy.   How’s that for cooking in your sleep?

Mix together the salt and sugar.  Rub the pork shoulder with the mixture and wrap tightly in plastic wrap.  Refrigerate and allow it to marinate for at least 6, but no longer than 24 hours.

After marinating, take pork butt out of the fridge and place it in a deep baking dish or dutch oven.   The meat should fit rather snugly.  Let it rest at room temperature about 1 hour.  Meanwhile adjust an oven rack to the lower middle position, and preheat oven to 300 degrees.

Cover the baking dish completely with foil, or put the lid on the dutch oven and cook for about 6 hours or until the meat pulls easily with a fork.  There should be a good amount of fat and juices in the bottom of the pan.  Let the meat rest for 30-45 minutes before pulling it.  After it has been pulled, mix in some of the fat and juices, to taste.

The neutral flavor of this pulled pork makes it perfect for a variety of preparations.  Serve it as  pulled pork sandwiches, with soft potato rolls, pickles, and cole slaw , or try substituting it in this recipe for pork belly tacos.

3 thoughts on “Pulled Pork that Practically Cooks Itself”