With the chill of winter still in the air, we love a good braised Sunday supper.  This recipe is a variation on Chinese style red cooked pork, using boneless beef short ribs.  Slow cooking in the oven, this one-pot meal fills the apartment with the aroma of slow simmered beef, cinnamon, anise, and five spice.  Buy well marbled short ribs for the best flavor.  For a low carb option, omit the carrots and substitute diced pumpkin, red radishes, zucchini, or summer squash.  I’ll bet okra would be delicious too.

1.  Marinate the short ribs.  In a medium bowl, mix the five spice powder, soy sauce and hoisin sauce.  Coat the short ribs in the marinade, and leave covered, in the refrigerator for up to 4 hours.

3.  Return the short ribs to the pan, and add the reserved marinade, the star anise, cinnamon stick, chicken stock and chile.  Bring the liquid to a boil, cover the pot and transfer to the oven on the middle rack. 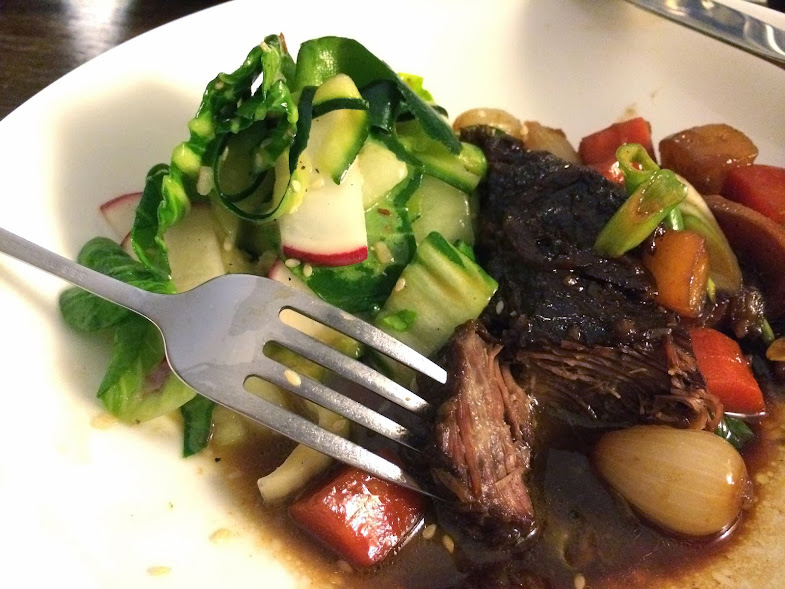 We are slowly making our way through the suckling pig.  On Friday I pulled out one of the shoulders to cure. Thyme, sage, and juniper are traditional additions to the brine, but for a change of pace I used coriander, orange zest, and a little cumin instead.

Sunday morning, I washed the shoulder, deboned it, and pan roasted a 1 lb. piece for breakfast. You might remember from the Cracklings! post, that this has become our favorite cooking method for small portions of suckling pig.  There was a pretty thick layer of fat, so I let it render, skin-side down in the saute pan over medium-low heat until it got really brown and crisp. Then I flipped it and popped it in the oven at 400°F to finish cooking (about 8-12 minutes).  The ham was salty, sweet and tender, and had a nice citrus finish from the orange zest and coriander. Plus, I’m totally addicted to that crispy skin! Since D. and I have been on Atkins we’ve gotten pretty tired of eggs, so we had the ham with a little dijon mustard and roasted brussels sprouts instead. 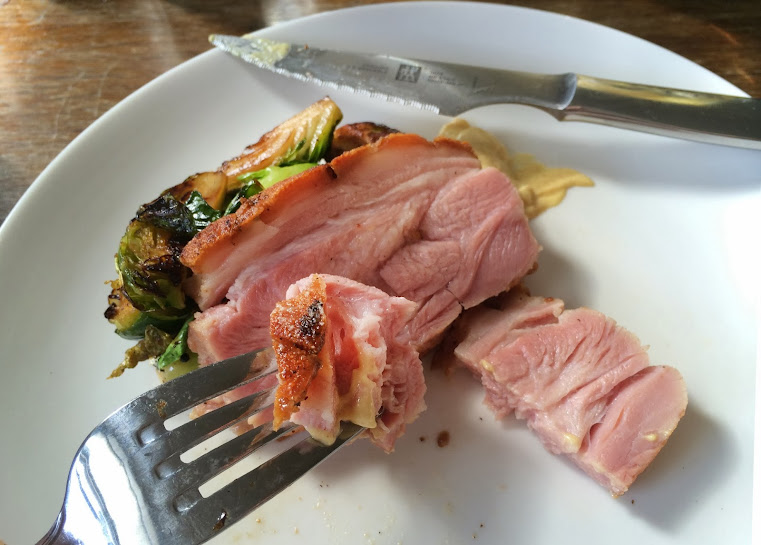 Here is a basic brine for curing just about anything from a ham, to turkey breast, or beef brisket. Curing time will vary according to the the type of meat, its weight, and thickness.  A 4-5 lb. pork loin will take 48-60 hours.  A 3 lb. turkey breast may only take 36-48 hours.  A beef brisket will take longer, 5-7 days. If the meat cures too long, there is a chance it will be too salty.  But if the cure does not have enough time to penetrate to the center of the roast, you will notice discoloration in the middle, but only after you have cooked it. This is because the sodium nitrate in the curing salt turns the meat pink when it is cooked.  Any uncured parts will turn white or grey, and will not be fully preserved.  Curing salt is inexpensive and available from a number of sources online, including Amazon.com.  If you know a friendly artisanal butcher who makes house cured meats and pates, he will probably be happy to sell you some and maybe even give you some pointers.

For pork or turkey, you might include 3-4 cloves of smashed garlic, a bunch of thyme, sage, and/ or rosemary, a Tbsp. of juniper berries or black peppercorns.

For brisket, you might add coriander seed, mustard seed, bay leaves, and crushed red pepper.  I also like to add an onion, garlic, and a cinnamon stick.

Combine water and all the remaining ingredients in a stainless steel saucepan or stock pot.

Bring the mixture to a boil and turn off immediately to prevent the water from evaporating.

Cool the brine completely in an ice bath, or by dividing the liquid into smaller containers in the refigerator.

If you will be brining a large roast like pork shoulder or brisket, use a metal skewer or a knife with a long narrow blade, such as a boning knife, to stab the meat in several places. This is to help the brine enter the thickest parts.

Once the liquid has cooled to 41°F, submerge the pork completely in the liquid, using a plate or other object to weigh it down.  Cure, refrigerated for 48-60 hours.

After the meat is cured, make sure to rinse it to remove any excess salt before cooking.

Cook the roast as desired.

Instead of cooking the entire roast at once, you might cut it up and freeze smaller portions, tightly wrapped until you need them.

Kalustyan’s is a great source for specialty groceries you can’t find anywhere else. Walk into the first aisle and you will find a wall filled with several different brands of bitters and flavored syrups. A little further down are another two cases of hot sauces.  In the corner is another wall dedicated to different types of rice from black forbidden rice and saffron colored basmati to classic arborio and carnaroli. Yet another wall is dedicated to salts. Sea salt, black lava salt, Himalayan pink salt, and black rock salt are just few you might find. Another wall is brimming with every sort of dried bean you can imagine.  The center aisle of the store is filled with large glass apothecary jars stocked with candied fruits and dried roots and vegetables. Dried herbs, spices, and additives for molecular gastronomy fill a second room. Head upstairs to check out their tea and coffee collection, or grab a quick lunch from their deli case of middle eastern specialties.  They do both retail and wholesale business, and offer a discount if you pay cash. Products are also available for purchase on line. 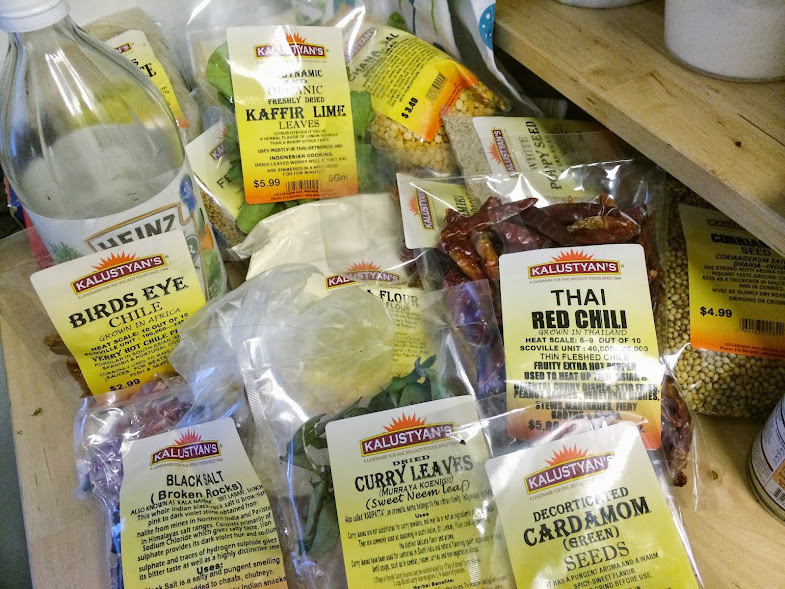 Another snowstorm seems like a good reason to stay in and have a kitchen project day. Today we are using our recent haul from Kalustyan’s to make some Indo style spice mixes. Anyone who has made Chicken Tikka Masala, Vindaloo, or Saag Paneer (my favorites) at home from scratch knows it’s a process that involves a lot of ingredients and spices.  It’s easier to have spice mixes on hand, and better and fresher if you make them yourself.  I’m new to Indo cooking, and have been using Raghavan Iyer’s 660 Curries as a starting point.  The book starts with a good chapter on making standard spice mixes (masalas) and other pantry goods.

Valentine’s Day is both one of the best and worst days of the year for restaurants.  It’s a great day for business, but is probably one of the most difficult days of the year.  The dining room and the kitchen gets deuced to death.  A 100 seat dining room filled with parties of two is very different than one filled with various sized parties of 2 or 4 or 5 or 6….During service you end up with twice as many tickets than normal, all ordering at different times, eating at different paces, and putting twice as many demands on their servers.

Now add to that the expectations that diners bring with them. The expectations they bring of each other only magnify their expectations on the restaurant.  More than any other evening, service and food have to be totally flawless.  Inevitably there are one or two couples that end up in an argument during dinner.  Anyone who has worked on Valentine’s Day has witnessed at least once the poor sap left with his food and the bill after his girlfriend has walked out right?  Or how many times have you had to wait on a couple that included the guest who was so impossible to please, his/her dining partner felt the need to apologize to you? While this is not the norm, it is more common on Valentine’s Day than any other day.

This is why I am so glad that this Valentine’s Day I will not be anywhere near a restaurant. Instead, D. and I will be making a simple low carb meal of oysters, a cowboy ribeye, and salad accompanied by a lovely bottle of champagne. For dessert we will be cheating on our diet with a little with a mixed berry crisp.

Those of my industry friends who are working tonight, I would love to hear your Valentine’s stories, good and bad, past or present.

For those of you lucky to be staying home this Valentine’s Day, here are some ideas for romantic meals for two:

Atkins Day 7.  Here is another quick low carb breakfast, brunch or lunch option inspired by classic wedge or cobb salads. Using crispy cool romaine lettuce as the base, combine it with whatever you happen to have in your fridge to add texture and flavor.  Today I had crunchy thinly sliced red cabbage, peppery red radishes, and diced tender sweet zucchini. Toss everything in this creamy ranch style dressing full of fresh dill, chives and parsley, and top with hard boiled eggs and crispy salty bacon, smoked salmon or salmon gravlax for protein.  If you are feeling ambitious, plan ahead and make your own bacon or gravlax.

Whisk together buttermilk, mayonnaise, sour cream (or creme fraiche), lemon juice and garlic. Fold in the herbs and season with salt and cracked black pepper to taste.  Store for refrigerated for 3-4 days.

The perfect hard boiled egg is cooked all the way through, with a bright yellow yolk.  Just a minute or two too long and the yolk starts to turn green and chalky.  Everyone I know has their own fool proof method for making them.  Here are two of them:

Method 1, the old school way. Place the eggs in a 2-3 quart saucepan, and cover them with 2 inches of cold water. Bring the water to a boil and lower to a simmer. Cook the eggs for 9-11 minutes more, then remove them and plunge them immediately into ice water. Wait until they are completely cooled before peeling.

Method 2 comes from one of my cooks. When you are in the kitchen and have a lot of things going on at the same time, it’s easy to miss moments like when your eggs start to boil.  That’s why I love timers.  Place anywhere from 2 to 10 eggs in deep saucepan. Cover with about 1-1/2 to 2 quarts cold water.  Place the pot over high heat and set a timer for 20 minutes.  When you notice the water boil, turn the heat down so the eggs boil gently and don’t break.  When the 20 minutes are up, remove the eggs and plunge them into ice water. Wait until they are completely cooled before peeling. I had my doubts about the accuracy of this method.  But I used it to make this recipe, and as you can see, it worked perfectly.