There is still plenty of suckling pig in our freezer: a bit of pancetta, a piece of five spiced pig belly, one more ham, two shoulders, the trotters, the head, and a bunch of bones.  We cooked a bone-in loin the first weekend. It was the tiniest loin you ever saw – smaller than rack of lamb. It was so juicy and tender, but both the loin and our boxing day ham didn’t have cracklings as crispy as I wanted.  When you roast a suckling pig whole, the best part are the cracklings – salty, crispy, chewy pieces of skin that are the result of long slow cooking. The problem was these smaller cuts did not have enough cooking time to get cracklings. 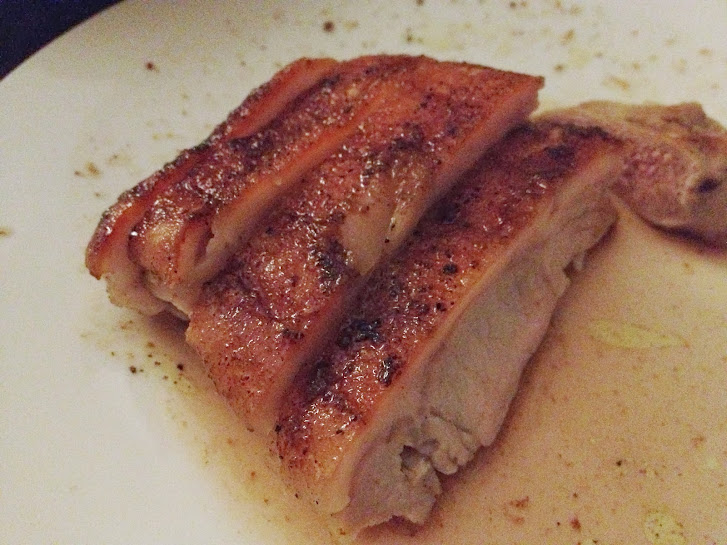 So how to get the same results from smaller cuts of suckling pig? Since I’ve only been working part time to develop brunch for La Vela, I’ve had plenty of opportunity to experiment at home. Yesterday I defrosted the other loin, and put it in a salt and sugar brine.  Deboned and unrolled, the loin was about the size and thickness of a large duck breast.  So I thought I’d use a similar technique cooking it.  This time I scored the skin in 3/4″ diamonds and placed the loin skin side down in a saute pan with some vegetable oil over medium heat.  I weighed the loin down by placing a heavy saute pan on top of it so that the skin wouldn’t buckle.  This way the entire skin would be in contact with the heat of the pan long enough to render the fat and crisp it without over cooking the meat.  It took time and some patience.  If the skin wasn’t crispy before going into the oven, it would never get there.  Once the skin was brown and crispy all over, I flipped the loin over and popped it in a 400 degree oven for a couple minutes to finish cooking.  After it had a chance to rest, I sliced it.  Success!! The cracklings were perfect.  They had just the right amount of crunch and salt, and the meat was still tender, sweet, and juicy.

By the way, while the meat rested, I tossed some brussels sprouts with the fat in the pan and popped them in the oven.  Once they were brown and roasted I added some orange zest, salt and pepper.  They made the perfect complement to the crackling loin.