So the cat’s out of the bag.  There’s a new fella in my life.  You know, the one with the serious ice cream habit?  Among the uncanny number of things we have in common is a shared opinion that appetizers and dessert are probably the best parts of any meal.  I don’t think that in our months of dating we ever actually sat at a table at a restaurant.  Instead we always seem to end up sitting at the bar and sharing a few appetizers, one entree if it really jumps out at us, and a few different desserts.  So the first time I cooked for us instead of going out, it seemed natural to make a few different small plates to share.

One of the challenges was that he has bunch of food intolerances.  Gluten, bad. Cow’s milk, bad. Corn, bad. Shellfish also bad news.  Now that’s not to say that he doesn’t love all those foods.  After all, I have yet to see him consume a pint of ice cream not made from cow’s milk.  But in the beginning, I didn’t really know how much or little he could tolerate, so thought it better to try and steer clear of the forbidden foods altogether.  So I came up a four course sharing menu that looked something like this:

Yes, the dessert would have gluten and cow’s milk, but I had seen him cheat with dessert before to I wasn’t worried.  So, armed with my menu and shopping list, I hit the stores out in my neighborhood in Queens.  I was really craving quail, and always saw them in packs of four at my local Asian market.  Of course on this day they only had them in giant frozen bulk packages.  That’s when plan B went into the works.  Instead I bought a frozen duckling.  I would use the breasts and save the legs for making confit.  They also didn’t have sushi grade tuna that day, but they did have salmon.  I knew some people are put off by salmon, so I texted him.  “Do you eat salmon?”  He did.  So with those two changes in place, I headed home to start preparing my mise en place.  Not knowing what if any cooking equipment he had, I figured I would chop and prep everything at my place, then just assemble everything once I got to his apartment (hmm, not very different than we do at the restaurant).  I arrived with plastic containers of blanched asparagus, cooked farro, meticulously diced shallots and jalapeño, thinly sliced cucumber, sea salt, freshly butchered duck breasts, cubed salmon, streusel topping, and a shopping bag full of limes, mushrooms, blueberries, greens, and vinegars.  He was still at work so I let myself in and got to work.

The only time consuming thing I had left to do was prepare the filling for the blueberry crumble.  I noticed he had frozen peaches in the freezer, and I love them with blueberries so I added them to the filling.  I also like a hint of cinnamon with my blueberries, and star anise with my peaches so I added a cinnamon stick and a pod of star anise to the filling while it was cooking.  I was happily chugging along with the Civil Wars playing in the background when my sister called. When I shared the menu with her, she asked “Are you sure you want to set the bar that high?” Seriously? This fella knew I cooked for a living, so you know I had to bring it. When all was said and done, we enjoyed the following four plates to share:

When I told my fella we would be having salmon and duck, he stopped in to see his friend at Pasanella and Sons to select an appropriate pairing.  They were the perfect complement to the meal.  When we got to dessert, he took a bite, then with a look of bewilderment demanded of me, “What did you put in here?”

“Um, blueberries, peaches, and sugar?” I slurred, a little tipsy and slightly puzzled by the question.

He was not convinced.

I thought a minute, then remembered, “Well, I cooked the filling with cinnamon and star anise.”

“Yes!” he said excitedly.  “Star anise! There was just a hint of something, but I wasn’t sure what it was.”

I was just playing around with the crumble and wasn’t entirely sure how it would turn out, but was pleasantly surprised by both the dessert, and his reaction.  It was love at first bite. For obvious reasons, I never got photos of that first meal, but here are some of other meals we’ve made together since: 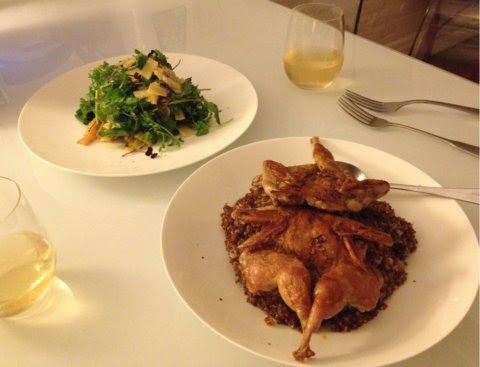 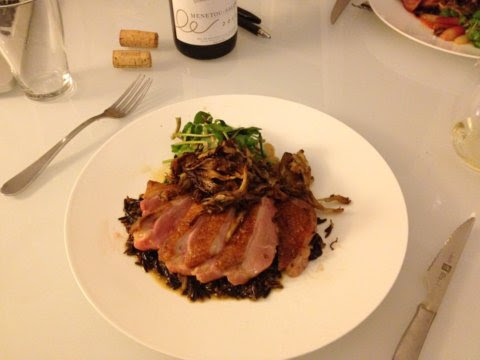 We haven’t tackled another four course tasting menu at home, unless you count the time we made his Wild Boar Carnitas.  It certainly took as much work as a four course meal.  This time I had been working all day and arrived at his place to find him elbow deep in masa harina, braised pork, and about a bottle deep into the rosé. I got right in there and helped to cook tortillas as he pressed them, whip up some guacamole, blend the tomatillo salsa, and form graham cracker crusts for key lime pie – from graham crackers he made himself!  It was an awesome feast, and the leftovers made terrific chilaquiles the next night.  I think we just might be the perfect partners in crime.  Cramped New York City kitchen be damned!

3 thoughts on “Dinners for Two”