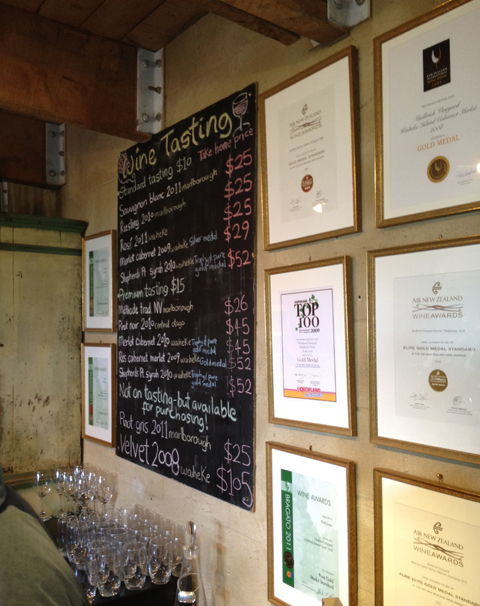 The tasting room at Mudbrick Vineyards

After our holiday in Pauanui, I was beginning to feel quite at home in Kiwi country.  One of the things I definitely wanted to do while I was here was to tour some vineyards.  Fellow chefs who had visited NZ recommended dining at vineyard restaurants for their superior food and pairings.  V thought we might try to make it to the Martinborough wine festival while I was here, but it was going to be a long drive there from Auckland, a lot of travel time for my short two week stay. Unfortunately she was also saddled with work to do.  So I ventured out on my own.  There are wonderful vineyards around Auckland, particularly on Waiheke Island.  Not knowing anything about any of the vineyards there, I opted to take a guided tour offered by Fullers called Wine on Waiheke.   For 117 NZ dollars, I got a 4-1/2 hour tour of three of the most prominent vineyards on the island, complete with ferry tickets, charter bus, and the wine tasting. The winding roads of Waiheke Island made me thankful I decided on a tour because I most certainly would not have had an easy time navigating my own way.  It was a good overview, with each of the three vineyards providing a distinctly different experience.

Waiheke Island is about a half hour ferry ride to from downtown Auckland.  Known in the 1960s as a haven for creative artists, musicians, writers, scientists, and actors, it has since become a popular holiday retreat and second home for many Auckland residents.  Our first stop on the tour was the Mudbrick Vineyard and Restaurant.  The property is breathtaking, and a popular site for weddings.  Started as a true labor of love by Robyn and Nicholas Jones in 1992, for many years it was not only a vineyard but their home.  The original mud brick house built by the Jones’ now houses a restaurant and tasting room. They now also have available two guest accommodations close to the vineyard – a modest owner’s retreat, and a more posh designer beach house right on the water. The vineyard produces Cabernet Sauvignon, Merlot, Cabernet Franc, Malbec, Syrah Chardonnay and Viognier.  It is however a small producer and does not currently distribute to the U.S. 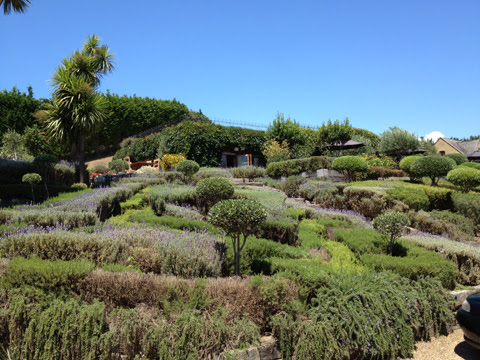 View from the parking lot of the Mudbrick Restaurant 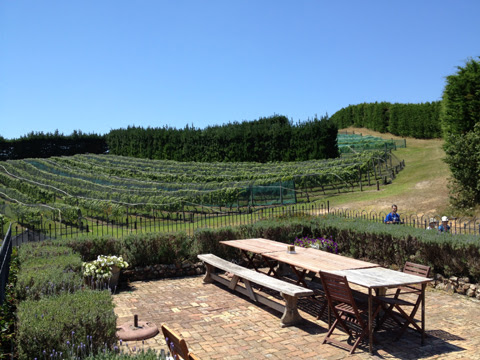 The vineyards at Mudbrick 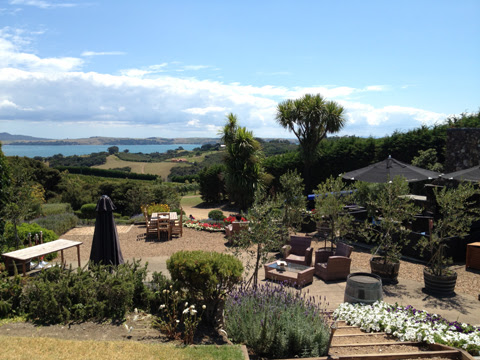 Our second stop on the tour was Goldie Vineyards.  One of the original vineyards on Waiheke Island, it was started over 30 years ago by Kim and Jeanette Goldwater.  It now belongs to the University of Auckland and houses and viticultural education center known as the Goldwater Wine and Science Center.  The vineyard has practiced sustainable winegrowing since 1998, and only produces 2000-3000 cases of wine each year.  They also do not have distribution in the U.S.   The vineyard also has a restaurant-cafe on site, which was not open at the time of our tour, but did provide delicious house breads, olive oils, honey, and other delectables to pair with our wine tasting. 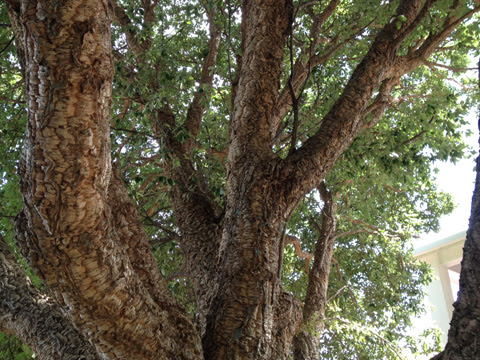 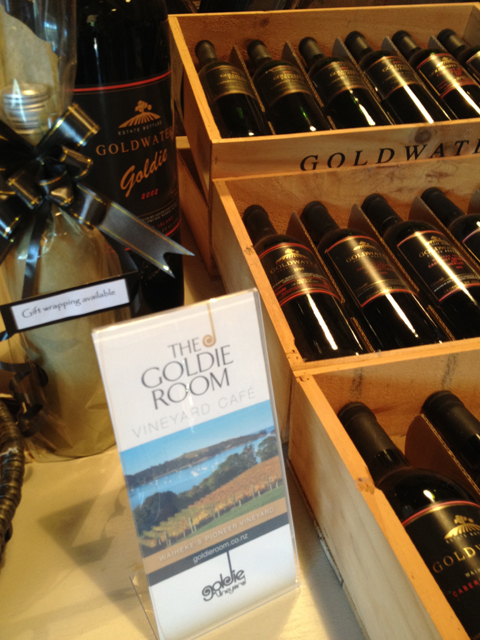 While they do not distribute to the U.S. you can buy on site and ship it home.

The final stop on the tour was the Te Whau (pronounced te-fow) Vineyard.  Another small vineyard producing excellent wines not available to us in the U.S, it is owned and operated by the Forsyth family and has the reputation as being the first vineyard in New Zealand to establish sustainable viticulture practices from its outset.  The vineyard’s restaurant serves award-winning food in a contemporary setting, overlooking the vineyards and outlying islands.  The menu that day was representative of the diverse cultural influences that set New Zealand apart.  Offerings included Manuka and Oak Barrel Smoked Salmon alongside New Zealand Scallops with Madras Curry and Cucumber and Pineapple Salsa.  Entrees such as Twice Cooked Duck with Shitakes, Bok Choy, Mandarin and Duck Jus seem to sit just as comfortably next to Grilled Pork Loin with Boudin Noir and Hazelnut Crumbs. 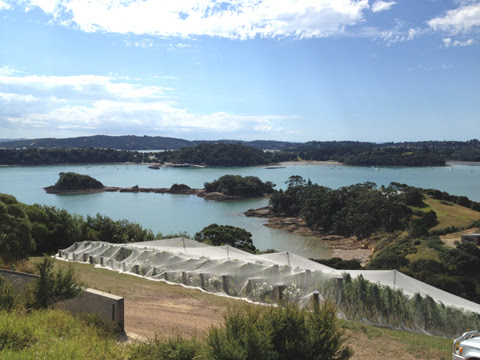 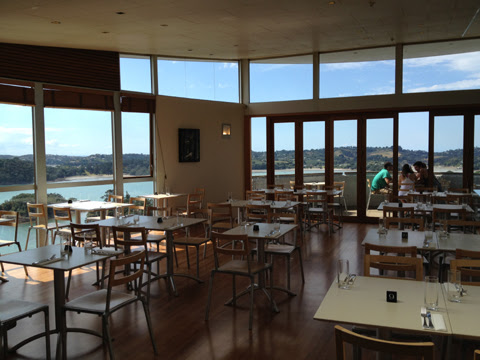 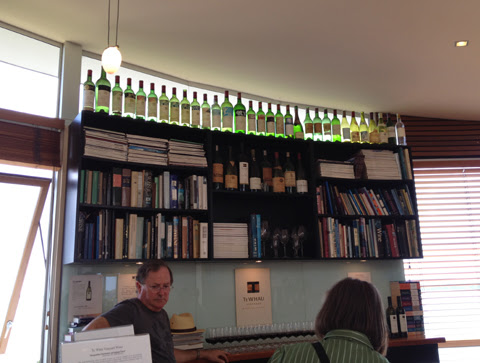 So, a lovely day of wine tasting on the Island of Waiheke.  The return ferry ticket is for no specific time, so once the tour was over, many of my companions stayed on the island to hit the beaches or return to one of the restaurants for dinner.  I would loved to have returned to Te Whau, but had dinner plans back at the house with V and S.  So I simply took in some of the sights, and observed some of the natives before hopping back on the ferry for Auckland.  I would have my vineyard meal on another day at the Villa Maria Estate and Vineyard. 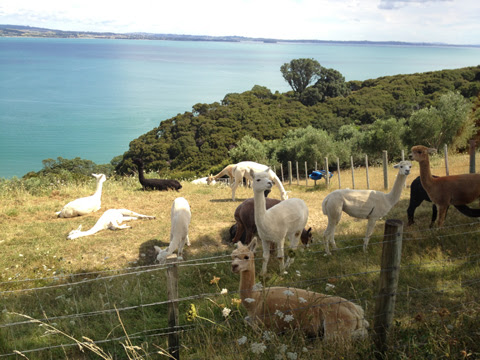 llamas relaxing in the Waiheke sun