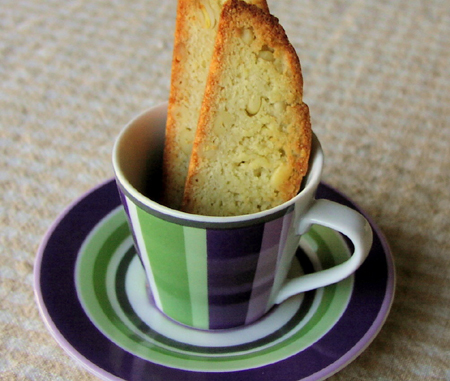 That’s the sound that came out of my mouth as a tray of half-baked biscotti logs slid off the oven rack and ended up  standing vertical with the edge of the tray stuck in the hinge of my oven door.  Luckily the actual logs of biscotti held on and didn’t fall off.  When I righted the tray there were some casualties, but I was able to salvage most of my work.  So at least my first attempt at making biscotti wasn’t a total disaster.

A couple months ago, one of my cooks asked if he could buy a log of biscotti we were serving at the restaurant.  The thing is, they were made by the executive pastry chef at our sister restaurant.  If it ever got back to her that I gave one to a cook, she would have given me an earful – and justifiably so.  After all, it was her work.  So I told him, “Look,  I have a recipe for biscotti.  When I have time,  I will make some for you myself.”

I love  a little biscotti with my coffee, but I had never made them before.  One slow night when I was working the pastry station at my last restaurant, I copied down the recipe for pistachio biscotti.  The thing is, the recipes chefs use in restaurants are all written in culinary shorthand.  They are nothing more than a list of ingredients with minimal instructions.  They assume that the cook knows what to look for, and already has the skill and knowledge to produce the desired result. This recipe didn’t even include an oven temperature, but since we baked most desserts at 350 degrees, I figured that would be a safe bet.  Using the recipe as a guide, I managed to bumble my way through, but not without some setbacks.

The first batch I made, I pulled the biscotti too soon, having erroneously based my assessment of doneness on the hundreds of chocolate chip cookies and blondies I had baked in the past.  After they cooled, I tried slicing one and found that it was still mushy inside.  So I put the tray back in the oven to finish cooking them.  This was the same batch that ended up sideways.  Had I done my homework I would have found that the America’s Test Kitchen Family Cookbook contained recipes for biscotti with detailed instructions – including oven temperature and time.  I was right to bake them at 350 degrees, but my timing was way off. 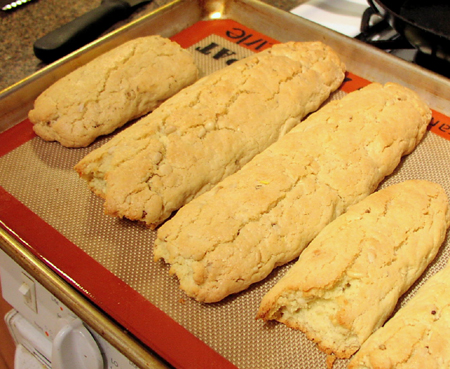 My second batch was more successful. I had cut the recipe in half to a more manageable size for the home cook and his/her KitchenAid mixer, and converted the original weight measurements to cup measures.  In doing so, I had to round out some measurements to avoid odd amounts like half an egg.  So I wanted to test the converted recipe to make sure it would work, and it did.

By the way, I didn’t have pistachios and ended up just substituting ingredients I had on hand.  So I present you instead with recipes for Lemon Pine Nut Biscotti and Vanilla Almond Biscotti.  Store baked biscotti logs tightly wrapped in plastic for up to 3 days at room temperature.  I just slice off a few pieces and pop them in the toaster oven for a few minutes whenever I need a sweet treat with my coffee.  Baked biscotti logs can keep longer if you store them in the fridge, but I found the butter and oils in the cookie cause them to absorb off flavors from the fridge.

Loosely based on a recipe by Dalia Jurgensen, author of Spiced

1/2 tsp. plus a pinch table salt or fine sea salt

For Vanilla Almond Biscotti, omit the lemon zest or lemon extract.  Substitute sliced almonds for pine nuts, and add 1/2 tsp. of vanilla extract with the eggs.

Ingredient Notes:  Weighing is the preferred method of measuring ingredients for baking.  Since ingredients such as flour and sugar settle, and can vary depending on producer, volume measures are not as consistently reliable.  For these recipes I used Arrowhead Mills all purpose flour, Domino granulated sugar, and Bob’s Red Mill Almond Flour.

One thought on “My Almost Biscotti Disaster”