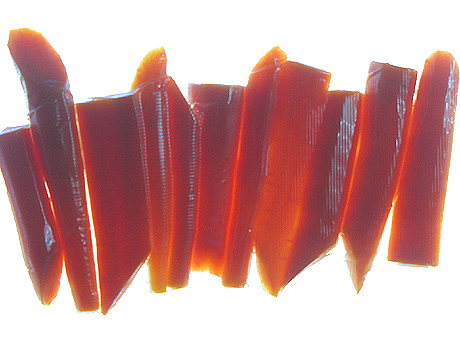 Okay, so I have been accused of being a little bit of a gadget girl.  But you can’t blame me, it’s genetic. Sources have informed my that my own father has been known to order computer equipment, then have it shipped to my sister’s, whereupon she would bring it over as a gift.  My dad would exclaim something to the effect of, “Wow, how did you know this is exactly what I’ve been looking for?’  and my mom would be none the wiser.  Sorry guys, the jig is up.

Well, I’ve been wanting to get into sous vide cooking for some time, but it’s not a technique that’s necessarily used at my current job.  Until New York City Health Department developed standards regulating the use of sous vide, many restaurants were using the technique under the radar.  But now that most of the top restaurants in the city are certified to use sous vide, it has become quite commonplace.  After all, Thomas Keller’s Under Pressure, a book demonstrating the use of sous vide in his restaurants, has been around for years, and there are very accessible pieces of equipment on the market now that make sous vide a very practical addition to the home kitchen.  So as a restaurant professional, there is no way I’m going to get left behind in the dust.

Sous vide is a French term meaning under vacuum. Quite simply, the technique involves sealing food in a vacuum pouch to achieve an oxygen deprived environment.  This may be accomplished in one of two ways:  either by the use of an edge type vacuum sealer such as the FoodSaver brand, or by use of a commercial type chamber vacuum sealer such as those made by Multivac or Koch Equipment. 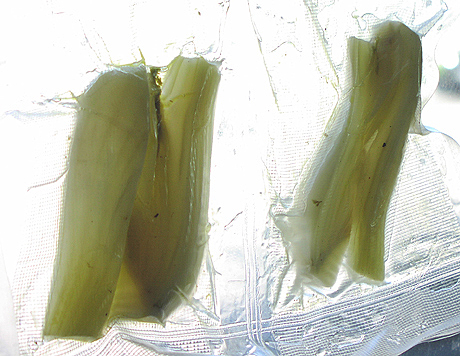 However there are applications of sous vide other than low temperature cooking.  For the home, one useful application is food storage.  Since many of the micro-organisms responsible for food spoilage require oxygen to thrive, storing food in the oxygen deprived environment provided by sous vide can extend shelf life.  Sous vide is also a good way to marinate foods.  For the home cook this poses a little bit of a challenge since most marinades involve liquids, and technically you can’t seal liquids without an expensive and bulky chamber type vacuum machine.   You can get around the limitations of a home type edge vacuum sealer by freezing measured portions of the marinade first then sealing it as you would with solid ingredients.  Once the bag is sealed and the marinade melts, the result is the same.

Another technique used by many fine dining restaurants using sous vide is texture modification. By compressing fruits and vegetables in a chamber vacuum sealer, they can intensify their flavor by making them more dense, or infuse them with other flavors such as with liquors.  Because of the highly specialized nature of this technique and the expensive equipment that is required to perform it, I feel is of little benefit to the home cook.

More important for me was the learn how to use low temperature cooking especially since I love a good slow poached egg on my ramen noodles.  So gadget numero uno I required was the immersion circulator. The model used by most professional kitchens (and at the French Culinary Institute) is made by Polyscience, and would have been really useful back when I made Porchetta di Testa. Until recently though, the least expensive models were still just under a grand – ouch.  Then I noticed some bloggers had gotten into sous vide using the SousVide Supreme water oven.  At around $400 it was definitely more budget friendly, but I simply did not want or have the space for another bulky countertop appliance, especially one with a limited capacity. I was almost ready to give in and plunk down the cash for a pro immersion circulator  when I saw that Polyscience had come out with a pared down, more compact immersion circulator geared for home use.  At $799 it is still pricey, but a good compromise between the pro circulator and the water oven, and it comes with a handbook written by Thomas Keller, containing useful guidelines and recipes to get you started on using sous vide.  Plus, I got  the circulator through Williams Sonoma, who are currently sweetening the deal with two free gifts:  a 20 quart stock pot, and a polycarbonate food storage container, both compatible for use with the immersion circulator.  Beware those who live in cramped New York apartments though.  The storage container and stock pot are a nice perk, but both are big commercial pieces of equipment and you will have some trouble finding a place to store (or even to wash) them.

As for the vacuum sealer I knew right away the chamber type was out of the question.  Not only are they extremely expensive, but I simply don’t have the space for it.  I ordered a Caso brand edge type sealer, also from Williams Sonoma for under $200.  It comes with nice heavy duty bags in rolls of two sizes, that when used properly with the machine make a tight seal. 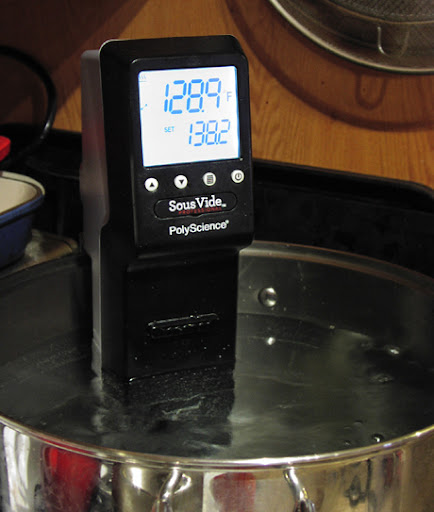 The first thing I made was slow poached eggs, and using the time and temperature reference guide included with the immersion circulator it couldn’t have been easier.  I set up my water bath canner on the counter next to my stove, (the stockpot arrived later in a different box, but I finally found a good use for the water bath canner…) clamped the circulator to the edge, and poured hot tap water into the pot – the immersion circulator has  helpful markers indicating minimum and maximum water levels.  I set the circulator to the desired temperature ( I like my yolks kind of creamy, so that was around 147º F) and in a short time the indicator showed that the water had come to temperature.  I dropped my eggs in, and in 40 minutes had perfect slow poached eggs.  The older chefs at FCI used to tease that it used to take 3 minutes to poach eggs, and now it takes an hour – but the result is totally unlike a traditional poached egg. I don’t have a picture to share yet, but I assure you when I get my pork ramen recipe up, it will include a slow poached egg.

Next I increased the temperature on the circulator to 185° F, to tackle some vegetables.  This apparently is the temperature at which vegetables become tender but without becoming mushy.  Here is where I might recommend pre-heating water on the stove.  For lower temperature foods I found hot tap water to be close enough to the desired temperature that the immersion circulator heated things up pretty quickly. However, if you are used to a gas stove, and have one super jet engine burner that you always use for big pots of water like I do, you will get impatient waiting for the immersion circulator to heat the water up to 185° F.  I would recommend returning the pot to the stove – after removing and unplugging the circulator of course – and bringing the water up to temperature, then using the circulator to maintain it. 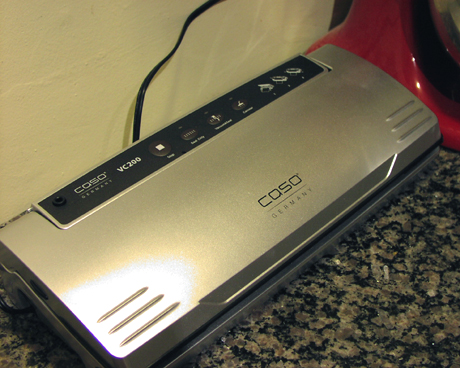 Mind you, green vegetables do not maintain their color sous vide, so for those, the experts (i.e. Mr Keller) recommend the tried and true method of blanching in a big pot of salted water.  But for dense non-green vegetables like carrots and fennel bulbs, both of which I just happened to have in my fridge, sous vide works beautifully.   First  I tried the fennel.  I cut it into wedges about 1″ thick and sprinkled them with some salt, pepper, and olive oil.  I cut a piece from the roll of vacuum plastic and sealed one end with the vacuum machine’s seal only function.  Then I put all pieces in the bag and sealed it using the vacuum seal function.  At first some of the olive oil seeped thorough and it didn’t make a complete seal.  So I cleaned the inside top edge of the bag and tried again.  This time it sealed, but when I put the bag in the water bath, there was still enough air inside so the bag was floating and some of the fennel was not submerged.  So I tried again.  This time I made another seal crosswise down the center of the bag to so each portion of fennel had it’s own compartment, and there was less air for the machine to vacuum out.  This worked much better.  After about 50 minutes they were perfectly cooked.

Next were the carrots.  I cut them so they were pretty uniform in thickness – important so they cook at the same rate – and simply sprinkled them with a little salt before sealing them in 1 layer in the bag.  The seal took much better this time.  The plastic was tight against the carrots with barely any air inside, and in about an hour I had perfectly cooked carrots that were bright orange and tender, but still firm.    I cooled both vegetables, still in their bags in a tub of ice water, then tossed them in the fridge for dinner tomorrow.  Mr. Keller states that when properly chilled and refrigerated at 38°F or lower, vegetables and other foods cooked sous vide will keep fresh for about 3 days, and that anything you don’t plan to use within 3 days should be frozen.  Mr. Keller’s guide also includes important information regarding safe handling of foods cooked sous vide, since there are some nasty bacteria such as e-coli, botulism, listeria, and salmonella, that can thrive in a vacuum.  Generally speaking if you keep your food chilled below 38º F, cook it to above 135º F, then chill it back down if it isn’t going to be used right away, you should be pretty safe.  The less time your food remains at room temperature the better – 4 hours, including cooking time, being the absolute limit.

I also sous vide cooked a piece of grass fed sirloin from Manx Station Farm.  This I sealed in two layers of plastic before cooking, following advice from David Chang’s Momofuku Cookbook.  Can you think of a bigger mess than a vacuum bag of meat accidentally opening up in your sous vide bath?  Anyway it’s been chilled and I am saving it for dinner tomorrow with the carrots and fennel.  Won’t know how it came out until we sear it off and cut into it, but I’ll keep you all posted.  Believe me, as I figure out how the technique fits into my culinary life, there will be much more sous vide to come.  Until next time…

One thought on “All Aboard the Sous Vide Bandwagon”