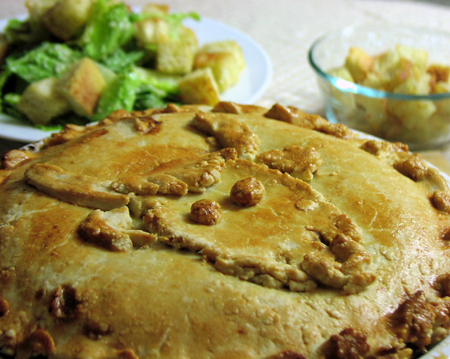 “…not too much kidney…just enough to give it that touch of bite…and lashings of steak, oooh, and it’s good steak too!…ooh.” – from Jeeves and Wooster, Season 1: The Hunger Strike.

Is it possible we watch way to much Jeeves and Wooster? Perhaps it’s a sign, that after the ‘teenth  time of watching Tuppy Glossup describe Chef Anatole’s masterly Steak and Kidney Pie with such mouth watering anticipation, I finally needed to make one.  In keeping with the spirit of Jeeves and Wooster, I decided to use a British recipe for Steak and Kidney pie, and remembered coming across a recipe in Hugh Fearnley Whittingsall’s River Cottage Meat Book

.  So I ordered some grass fed beef kidney and steak from Lewis Waite Farm, and  finally had the chance  last week to thaw  them out and work on the pie.

The thing is this:  When we made beef kidneys in culinary school, I could barely stand to taste them.  Yet Tuppy Glossup and Mr. Whittingsall managed to convince me that Steak and Kidney pie could be truly delicious.  Here I believe, was my first failure in judgment.  My second, was perhaps getting frozen instead of fresh kidney. After thawing it out (properly, i.e. in the fridge), I took the kidney out of the package, and started trimming it.  The center was still a little frozen, but as I continued to cut, it continued to thaw out.  It also began to give off a distinct odor of piss.  Not a strong odor, but it was there.

Is this normal? I thought. The kidney looked fresh (well I guess freshly frozen would be more accurate). It was brown on the outside with just some red coming through, and bright red in the center, just like the color photos in my copy of The Fundamental Techniques of Classic Cuisine

. Then I remembered a passage in Julie Powell’s book (you know the one) in which she quotes her mother as saying “But kidneys taste like piss.”  I stood there for a few minutes, knife in hand, just staring at the kidney on the cutting board.  If it kind of smells like piss, I wondered, then what on earth will it taste like? With that, I swept everything off the cutting board into a plastic bag, tied it up and dumped it in the trash.

What then, you might ask, is depicted in the photo?  Well, once I had my mind made up to make this pie, I couldn’t bring myself to abandon the plan.  So I pulled that bag of kidney out of the trash, sorted out the good pieces from the scrap, and tried rinsing them – to no effect.  Then, believe it or not, the kidney went back into bag, and the bag back into trash.  Okay, I know how it sounds, fishing the bag out of the trash a yet again, but I was stubbornly held to my mission.  I couldn’t even bear to throw the kidney directly into the trash.  I consciously sealed it in the bag in case I changed my mind and wanted to fish it out again.

After overcoming that initial hurdle, there was no choice but to to see my plan through to the end.  I sauteed up the kidneys, and as they cooked, their aroma became more bearable.  They smelled pretty typical of cooked offal, like liver for example.  This seemed like a positive development.  So I pushed on and sauteed the steak, the onions, deglazed the pan with some red wine, and put everything back in the pot to stew for an hour and a half while I went to work on the pastry crust.

The River Cottage recipe calls for a rough puff pastry.  I could have just used store bought puff pastry and made my life a little easier, but if there’s one thing you know about me, it’s that I like a good project.  Puff pastry is made by folding a layer of dough around a block of butter, then rolling it out, and folding it up, like you would to stuff a letter into an envelope.  Then you refrigerate it and roll and fold again.  The process is repeated several times until you end up with layers and layers of butter and dough.  When it bakes the steam in the butter causes the layers to expand and produce the familiar flaky pastry.  With rough puff pastry, instead of folding the dough around the block of butter, all the ingredients are cut together as you would with pie dough, then rolled and folded as with puff pastry.  It doesn’t bake up as flaky, but it makes a good pie crust.

When the stew filling was ready, I have to admit it still had that lingering odor.  I hadn’t put much kidney into the pie, hoping that all the other flavors might help to dilute its potency.  I tasted some of the steak and the gravy, and adjusted the seasoning.  I still couldn’t bring myself to dig into the kidney, but the rest seemed alright.  So I assembled the pie and popped it in the oven for another hour.

In the meantime I made some sourdough croutons, washed some heads of romaine lettuce and put together a quick Caesar salad.  When the pie was ready, we popped Jeeves and Wooster into the DVD player, and sat down to eat.  As soon as I cut into it, the pie released a big cloud of steam with the strong aroma of…kidney.  I served us each a piece and it looked good.  First I took a bite of steak, then a mushroom, but the first bite of kidney and I was done.  Boyfriend  winced after taking a bite of his pie, and couldn’t even take a second.  We looked at each other across the table, then at the pie.  It was a lot of work for something neither of us could stomach, and if I were ever to try it again (someone talk some sense into me please) it would have to be with super-super-fresh, straight-from-the-cow and still-covered-in-fat kidney.  Now we just had to figure out what to do about dinner.

Oh well, I said.  How about some steak fajitas?

One thought on “Kitchen Fail Steak and Kidney Pie”