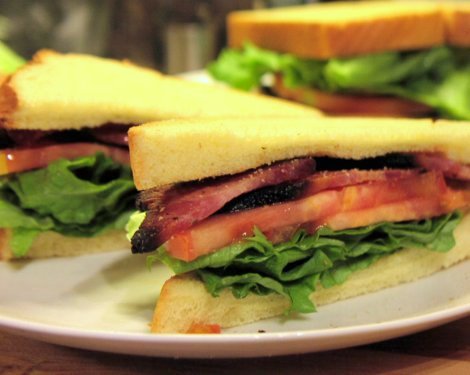 Bacon, oh delicious bacon.  There is no other food I can think of that inspires people to the same degree of epicurean lust.  In one Jim Gaffigan standup routine, he spends a good two and a half minutes extolling the joys of eating bacon in its many forms.   One waiter at work shared with me that having described a dish as containing bacon, he has had even more than one customer grunt “Yeah, bacon!”  Bacon is equally delicious and dirty.  It is salty, sweet and smoky all at the same time, not to mention luxuriously fatty.  It is a guilty pleasure that connects us to an older more primal way of life.  Since modern refrigeration has eliminated the need for us to even make bacon or other cured and smoked meats, it is something we do for the pure enjoyment of flavor.

A couple years back, we bought a Brinkman smoker for the house at an end-of-season sale.  And a few weeks ago I got my hands on an entire slab of Berkshire pork belly, so naturally I decided to try making bacon at home.  I consulted three different books on the matter:  Jane Grigson’s Charcuterie and French Pork Cookery

. What I learned was that making bacon is really easy.

First you dry cure the belly in a mixture of salt, sugar, and whatever flavorings you may choose.  Salt is the only essential ingredient, since it is the primary preservative.  Beyond that, sugar and other flavorings are added to balance the salt, and a small amount of curing salt (a.k.a. pink salt, saltpetre) though not essential, is added to maintain the rosy pink hue of the pork and as a precaution against botulism.  All three books vary greatly on their suggested ratios of salt to sugar.  Ruhlman/Polcyn’s cure is a ratio of 2 parts salt to 1 part sugar, plus 10 percent of their combined weight in pink salt.  Grigson’s cure calls for 2-1/2 lbs. of salt to only 1 oz. sugar, and 1 oz. pink salt.  Fearnley-Whittingsall’s cure falls somewhere in between.  I decided to try two recipes:  the River Cottage one and the Ruhlman/Polcyn one.  The basic process is pretty much the same.  Once you mix the cure, you just slather the belly with enough of the cure to evenly cover it, and set it in a container or ziploc bag in the fridge.  The River Cottage recipe says to pour off any liquid that is released and rub the belly with fresh cure each day, Ruhlman/Polcyn directs you to simply turn the meat to redistribute the cure and the liquid.  A 1″ thick piece of belly will usually be ready in about 4 to 5 days.  Then you just wash off the cure and you have  what is commonly referred to as salt pork.  Before smoking, let it dry in the fridge for a day or two.  Drying creates a tacky surface on the meat known as the pellicle, which allows the smoke to adhere to it.

Then there’s the Smoke:

Bacon, as commonly understood in America is then just smoked salt pork.  The River Cottage recipe calls for cold-smoking the bacon, at a temperature of less than 100 degrees F (ideally 75°-86° F), for 24 hours continuously, or up to a week, intermittently.  Ruhlman/Polcyn, call for a hot smoke, at 180° F to 200° F until the internal temperature of the bacon reaches 150° F.  So again, here is a matter of personal preference.  The longer the smoke time, the smokier your bacon will be.  A cold smoke takes longer, but  it is more difficult to maintain the proper temperature without special equipment.  A hot smoke can be done in a charcoal grill in a matter of a few hours.  Since I didn’t have the proper equipment (or time, for that matter) for cold smoking, I decided to just go with a hot smoke.  The difference is that hot smoking slow cooks the meat as it smokes, resulting in a final product that is essentially ready to eat.

To hot smoke meats, you can use a charcoal smoker, like the cylindrical kind, or a charcoal grill.  The technique simply involves building an indirect fire, which roasts the meat rather than grilling it.  The meat is not placed directly over the coals, but a distance above or to one side.  In a cylindrical smoker, the meat is held on a rack a couple feet above the coals.  In a charcoal grill, you would build your fire on one side of the grill, and place your meat on the other side, away from the coals.  In both cases, the grill is then covered, trapping the heat and smoke inside so that the meat slow roasts the same way it would in an oven.  If you use hardwood charcoal, you will get the smoky hardwood flavor without having to use wood chips.  However, hardwood charcoal burns hotter and faster so you will probably have to keep a close eye on your fire.  Using lump charcoal and wood chips is definitely easier.  First soak  your wood chips in water for about half and hour.  In the meantime, light the coals.  When they are glowing red, spread the wood  chips over them so that they smolder and create the desired smoke.  Then just place your meat away from the heat source, put the lid on, and slow smoke until the meat reaches the target internal temperature of 150º F.

So How Did it Go?

As luck would have it we experienced a warm spell last week – just as my bellies had just finished curing and drying, and were ripe for the smoking.  It was 60 degrees outside and everyone was walking around t-shirts.  Looking around, it was hard to believe we were still in the middle of February.   So I went digging around in the basement for our smoker.  I opened up the package, and what did I find inside but two copies of the complementary recipe book, but no assembly instructions.  Thankfully, this was not a problem.  After working in a futon shop in my post college years (thanks Lou and Lorrie) and having to assemble many a home furnishing product, I found the smoker was not much different.  Charcoal, on the other hand, was a problem.  As in, I didn’t have any, and my car was in the shop.  If I had had an electric hot plate, I could have rigged the smoker to work like the Big Chief electric smoker we use at work, but I didn’t have a hot plate either.  It’s moments like these when a close-knit family of pack-rats is a definite blessing. I called my aunt and uncle who live down the street to see if they might have an electric hot plate or some charcoal kicking around.  They couldn’t find their hot plate, which they were sure they had but would have to go rooting around their basement to find.  They did find an old 20 lb. bag of charcoal they had no use for, since they were grilling with propane nowadays. 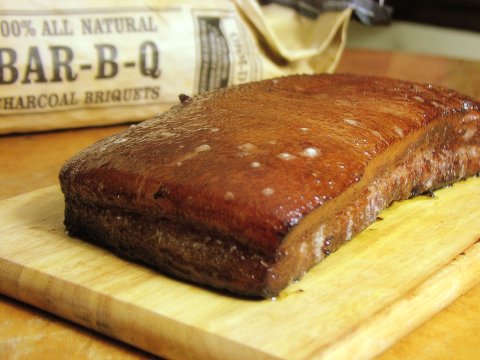 Bacon, fresh from the smoker

By the time I got started smoking my belly it was close to dark, and we don’t yet have lights out in our backyard, so I was out there with the belly, a pair of tongs, a bag of charcoal, a roll of newspaper, a butane torch, applewood chips soaking in a bowl of water…and a flashlight.  But it was worth it.  The hardest thing about the whole process was just getting the fire lit.  But once I got the coals glowing in the bottom of the smoker, I just sprinkled the applewood chips over them, set the belly on the top rack of the smoker over a pan to catch the drippings, and closed up the smoker .  Aside from checking the coals from time to time to make sure they hadn’t burned out there was not much else to do.  I think the temperature inside the smoker was probably higher than 200°F, but in about 2-3 hours, the belly had reached an internal temperature of over 150 degrees so I took it out and let it cool.  It had turned an amber color from the smoke, and was glistening and smelled amazing too.

Today it snowed again, and it’s hard to believe that just a few days ago it felt like Spring.  We reminded ourselves by  making some of the best BLT sandwiches ever.  As I unwrapped the parchment package, the aroma of smoke was released into the air from the slab of homemade bacon.  I cut a few 1/8″ thick slices off the slab, arranged them on a parchment lined baking sheet and set them in a 350° F oven.  In about 15-20 minutes they had rendered just enough fat, and were just beginning to crisp.  I let them drain on a paper towel.  Hmm-boy did they make some killer sandwiches.  There are two things about homemade bacon that really make it stand out from the supermarket stuff.  First it’s drier, so it doesn’t shrink and curl nearly as much.  Second, its flavor is so far superior, and it is so easy to make, I don’t think I can ever go back. 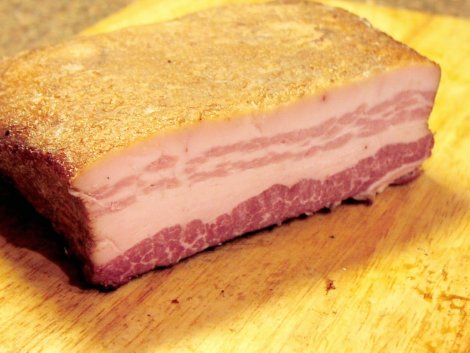 Even though the package of wood chips I had said that you could use them dry, this method ends up creating flare ups that cause the temperature to get too hot, and create undesirable charring on the meat.

The hot smoked recipe I used said that the bacon would keep up to two weeks in the fridge or 3 months in the freezer.