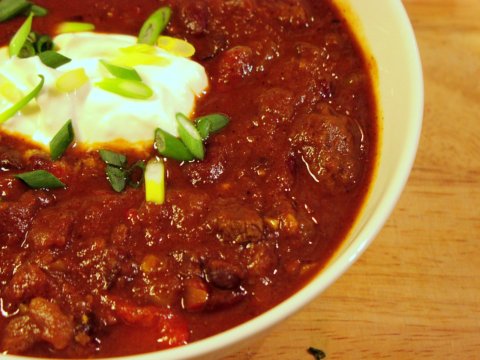 A few weeks ago, I had the opportunity to represent the restaurant at Chelsea Market’s  NY Chilifest 2011. I along with representatives from our other two restaurants in our group, spent several hours ladling out some damn good chili and schmoozing away a Sunday afternoon.  It was the first public cooking event I participated in and I had no idea what to expect.  All the meat for the chili cookoff was provided by Dickson’s Farmstand Meats, and ticket proceeds were being used to support Food Systems NYC – both supporters of local and sustainable food production.  Restrictions allowed three people from each restaurant to attend and serve their (hopefully) award-winning chili to 1200 people, and promote their restaurant.  One of the tricky things was how to transport 50 gallons of hot chili to the event and keep it warm on only two small hot plates.  The solutions were as varied as the chilis.  One of our neighbors even brought their own electric steam tables and trays, only to find that there was no access to power – only butane.

The event started at 4pm and for the first couple of hours there was just a sea of people stopping from table to table, chili mug in one hand and a beer in the other.  There were television people there, filming, and asking each team to describe their chili.  There were also a host of photographers, one of whom stopped me at one point, saying “that’s perfect, don’t move.”  At another moment, I turned around to find a mic in my face and a video camera pointed at me.  My cohorts had thrown me to the wolves.  Here I was, having had nothing to do with preparing our chili, yet now being asked by a reporter to describe it.  I am sure during the course of this event, I did or said something dumb that is somehow going to end up in print with my real name attached to it.  Oh well.

By the time two hours had elapsed, even the most hearty looking chili-eater was passing our table by, putting a hand over his stomach and gesturing that he could eat no more.  And at 6:30 the judges had made their decision and announced the winner of the competition.  Unfortunately the judges did not award us the  Golden Chili Mug, but we got a good response from the public, and our chili was pretty much gone, so we took the  chance to sample some of our competition.  There was everything from Texas style “bowl of red,” sans beans, to very traditional Mexican style chili, to more unexpected and modern “chef” interpretations.  Of course, Fette Sau, a barbecue joint located in Williamsburg added some pork to their chili, and Telepan presented a green chili that contained kernels of hominy.  Even the Food Network test kitchen had a table.  The aroma of beef, chiles, and spices from the various tables lingered throughout the concourse at Chelsea market.  I could only imagine the aroma that could very well follow as 1200 people digested the 20-30 ounces of chili served to them by all the restaurants, and all the beer provided by Brooklyn Brewery.  Once our chili-pot was empty, we certainly didn’t stick around long enough to find out.

Since I didn’t actually participate in the chili-making for the event (credit goes to my executive chef and his team at my former restaurant), I have been meaning to put up a big pot of red chili for me and the old boyfriend.  After some hectic days at the restaurant following the departure of the Hulk, and gearing up for Valentine’s Day, I finally had a day off.  So last night I thawed out 2 lbs. of Manx Station Farms grass fed steak I had knocking about my freezer (from Basis Foods, of course)  and made a pot of slow cooked steak chili.  I often make a chili with spicy chorizo, chipotle peppers, and mole style spices.  But this time I decided to keep it simple and go with a basic American style chili: red and black beans, tomatoes, onions, red bell pepper, garlic, chili powder, cumin, and cayenne.  Okay, so I did add a little cocoa powder at the end for some richness, but just a little.  We enjoyed it in front of the tube, watching one of our more recently discovered favorite movies: Jeff Daniels’ Escanoba in da Moonlight.  In case you haven’t seen it, think The Hangover, meets Parenthood but better.

28 oz. can of crushed tomatoes

salt and black pepper to taste

1.  Coat the bottom of a large dutch oven with oil and cook the onions and red pepper with the spices over medium low heat until soft.  Add the tomato paste and garlic and cook for a few seconds until the garlic is fragrant.

2.  Add the meat and cook until it is no longer pink.  Add the beans and tomatoes, and enough water to cover all the ingredients.  Simmer gently, covered for 45 minutes, then uncovered for another 45 minutes. until the meat is very tender.  Stir in the cocoa powder and add salt and pepper to taste.

TIP: Chili, like stew always tastes better the next day, after all the flavors have had a chance to mingle.

Try this with : Maple Glazed Cornbread

All the meat for the chili cookoff was provided by Dickson’s Farmstand Meats, and ticket proceeds were being used to support Food Systems NYC – both supporters of local and sustainable food production.

One thought on “A Big Bowl of Red – Grassfed Steak Chili”